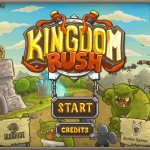 Kingdom Rush by indie game developers Ironhide Game Studio, is playable for free at Armor Games and it’s one of my favorites at the moment.  Your task is to defend the kingdom from an evil wizard who’s attacking you with goblins, trolls, bandits, demons and other undead.  Who needs a better story than that right?

You’re armed with four different towers that each have a couple of buffs to choose from and every few seconds you can call in some reinforcements or rain fire on the marauding hoards.  Don’t let the simplicity fool you; Kingdom Rush is an addictive tower defense game combining the best in strategy and challenge with a nearly unmatched playability for newcomers and veterans alike.  There are twelve levels, each with varied difficulty and additional challenge modes sporting balanced gameplay and expert animation that flows smoothly with cute little characters, brilliant voice acting, and original music from Taking Off and Hyperduck.  For as little as a dollar you can unlock the premium content which includes an extra level (and another announced for release by the end of the year) a new lighting bolt spell and some cosplay outfits for your reinforcements.  Soon to be released on mobile platforms and a sequel in the works, play Ironhide’s best game yet and victory can be yours.